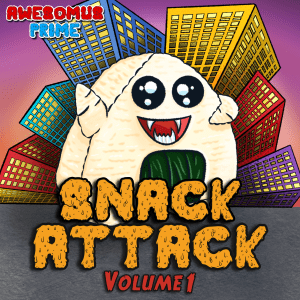 Jacksonville, FL- The wait for new music from Awesomus Prime ends on October 14th! Get ready for SNACK ATTACK Vol. 1, a double pack featuring the tracks “Incinerate” and “Final Boss 3.0” released under Kawaii Kunai. Prime felt they’d break the fast of waiting for their music with a snack pack that delivers a bass heavy banger with “Incinerate” and the journey of our Gamer dancing circles around the “Final Boss 3.0” but will they be victorious this time?

SNACK ATTACK Vol. 1 is the first in a planned series that features two new songs from Awesomus Prime. The dubstep banger, “Incinerate”, is a retelling of the sparring match between Saitama and Genos (One Punch Man) that has an aggressive battle feel with cybernetic elements that immerse you back into that fateful training session. SNACK ATTACK Vol. 1 also features the sequel to the “Who’s The Master?” track “Final Boss 2.0”. Continuing the journey of our ambitious Gamer to defeat the final boss, this time
they’ve changed their tune and went with a more danceable house vibe in “Final Boss 3.0,” but will that be enough to finally beat the game?

Now calling Jacksonville, FL home, Awesomus Prime is the music producer and nerdy DJ that has seized the convention world in their arms to deliver a welcoming hug of Love and Acceptance. Coming off their summer Surprise Tour which included Megacon, Blerdcon and Otakon 2022, Prime was ready to release more for their Frednz & Fanz. Flexing their love for music Prime has produced songs from lo-fi to dubstep, house to nerdcore hip hop and even touched on Drum and Bass and cyberwave. With the success of their album “Cyber Tokyo”, Prime wants to show the world that just because music comes from a nerdy inspiration, it can still hold its own in the mainstream market. Since creating the label, Kawaii Kunai, Awesomus Prime has expanded their family and now works with more nerdy artists and has brought more epic entertainment to conventions around the country. Follow Kawaii Kunai for more releases and
upcoming performances.

For more information, booking, promo request or to arrange an interview, contact Kawaii Kunai at kawaiikunaimusic@gmail.com or 609-451-1521