METROCON is an annual anime convention in Tampa that is wildly popular with fans who have access to more than 100,000 square feet of vendors and artists and nearly 500 hours of scheduled shows, panels, contests and gaming.

The entertainment-based event, which is steeped in original programming, has become Florida’s largest anime convention, making METROCON an obvious choice to include in our Florida Comic Cons 2020 Calendar, a month-by-month listing of legit comic cons in Florida.

We interviewed Ben Badger Jr., Director of Community Engagement for METROCON, to learn more. The result: We have six reasons you should attend METROCON in Tampa.

(Note: METROCON’s upcoming event at the Tampa Convention Center on July 23 – 26 was still on as of mid-April. Florida Comic Cons will keep you updated on postponements and cancellations via our 2020 Con Calendar https://floridacomiccons.com/events/ 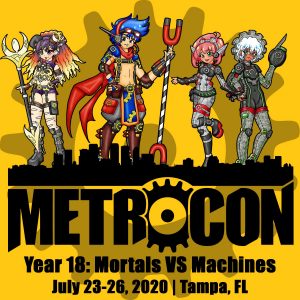 There are not many four-day comic conventions, with most being two-day events. But a four-day anime convention, an event more specialized than comic cons, is rare. METROCON became a four-day event in 2015, and is one of the few four-day anime gatherings in the nation. Here is the website to learn more: https://metroconventions.com/

Reason # 2: METROCON is the largest anime convention in Florida

METROCON is the largest gathering of anime fans in The Sunshine State. Last year’s turnstile attendance – the total number of attendees over the four days – was nearly 30,000. There were more than 11,000 tickets sold, showing many people purchased multi-day passes and attended more than one day.

Reason # 3: METROCON has intriguing annual themes, and this year it’s mortals vs. machines

METROCON chooses a theme each year that is largely adopted by guests, vendors and entertainers.  The themes take a “versus” approach that sparks fan debates about crossover series and games.  Past themes have included: Science fiction vs. fantasy, order vs. chaos, ninja vs. samurai and old-school vs. new-school.  This year’s theme is mortals vs. machines.

One of the things that sets the METROCON experience apart is original cosplay entertainment that includes stunts, combat, dancing, fire spinning, and other once-in-a-lifetime performances.

METROCON’s trademark show is an Anime Human Combat Chess Match, where various characters battle in a high-energy combat chess game to seek a resolution to their conflict. The Fire Show features performers fire-spinning for a live audience (and yes, it’s real fire.)  Other regular entertainment includes Noise Complaint, a group of cosplay tap dancers, and Geekapella, a troupe of geeky singers. Here is the 2020 schedule https://register.growtix.com/schedules/frontend/METROCON_2020

There are competitions for cosplayers and photographers, as well as a tournament for gamers. The Anime music video contest, known as the AMV, asks participants to blend images and sound to tell new stories from anime titles. The “Picture This! Contest” allows photographers to showcase their best convention shots and cosplayer photos.  And if you’re selected the costume contest could have you strolling down the catwalk.

Reason # 6: METROCON has a rave every night

METROCON’s nightly raves are the largest convention raves in the Southeast U.S.